The right place at the right time happened to me recently.  At the World Travel Market in London I met with the great chaps from Aphrodite Hills and the Cyprus Tourist Office (CTO) enthusing about future plans for Red Tee Breaks I unexpectedly get an invite to join a group of 12 golf pros on their visit to Cyprus.  Mindful of the broken wrist, the fact I wouldn’t have played for three months and they were – well golf pros – I tentatively said yes and quickly booked a lesson with my pro Tim.
Tim assured me I was hitting the ball as normal as before and didn’t seem to be favouring the wrist too much. I met with the pro’s at the airport with new found confidence this soon dwindled as I found out that there were meant to be 12 pro’s and me and I’d be playing with Costas from the CTO and Andreas from Aphrodite Hills. One pro, Barry, dropped out and I became the 12th golfer leaving Costas and Andreas to fend for themselves.
From that point I became Barry, but thankfully retained my handicap and played off the red’s.Getting to know the boys was easy, they were very welcoming and accepted me as ‘one of the boys’
The first day we played Secret Valley which thankfully wasn’t too far from Aphrodite Hills so not enough time to get nervous!  Being pro’s I was impressed by their game preparation, all on the driving range which naturally I had to do as well – it really helps to loosen up so note to self to do that again before a game. My usual preparation is to drive up to the first tee, bundle the clubs out, throw some money at my playing partners and hit the ball down the first – OK sometimes it went down the 10th, but I’d settle down after a few holes…
First tee nerves kicked in after I saw the three pro’s tee shots – trying to compose myself walking the very short distance (really?) to the ladies tees, I managed to get one away without too much embarrassment.  That was it we were off.  My playing partner Crue, was brilliant.  Not only is he a great golfer but he managed to ‘help’ me without it being obvious- and we came in with the winning score much to everyone’s amusement and cries of bandit.  The next thing to overcome was the amount of wonderful food Secret Valley fed us.  Being a meze and being ignorant to the non-stop approach to food service a few of us filled up on the bread and dip starter. Then came a whole host of other goodies, halloumi cheese, salads, mousakka, more dips more food and a dozen rounder golfers at the end.  Thank you Nikos – great golf course, great food course(s) and loving the plans for the future. 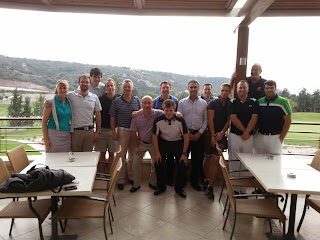 Back to the hotel feeling a little fat but happy with the golf to get ready for dinner!
A local fish restaurant in Paphos where we were met with a selection of fish – a fish meze of gigantic proportions. There was everything from mussels to squid to octopus plus some.  Some of the selection was distinguishable by its shape and taste, there was fish that was looking at you whilst you were eating it and fish disguised in sauces as well as chips (must have known we were British!)
After the meal, the waiter asked who wanted coffee.  One of the boys shouted ‘do you have any Decaf?’ the reply came back ‘no but we have nescaf?’  Who am I to give the waiter a hard time, his English was way better than any of our Cypriot Greek!)
The local Cypriot coffee is so dense that you could have stood your spoon up in it, the guys were bouncing with the intense caffeine hit – very happy chaps. 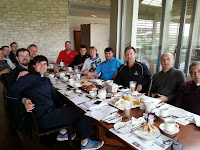 Day two was a 27 holer golf day.  9 at Minthis Hills.  We played a Texas Scramble over the back 9.  I wasn’t much help with this format, the boys had it covered quite nicely – I was along for the ride and entertainment!  The driving range at Minthis Hills is a sight to behold. Sat on top of a hill the range is as far down as it is away in the distance.  Having the elevated tee advantage certainly comes into play here but I wouldn’t like to be the ball collector!   Thanks Mary for an amazing brunch of ……………. everything.
Off to Elea Golf Club.  Playing 18 holes at Elea.  What great condition it was in.  With steep bunkers sand sledges were needed to get into them – getting out was even more fun.  In fairness I did visit a few bunkers that round but the sand was very playable.  Craig in his Essex drawl and sense of humour was on form when I shot a putt way past the hole ‘dead sheep’ he said.  What??? ‘still (you) ewe’ he elaborates – forget putting after that, far to busy laughing.  Good job Matt, my playing partner of the round held it together because I was no help whatsoever.  Elea is the kind of course I’d need to play a few times to get to know.  The greens are Mackenzie greens – in his LSD period.  Great course though. Thanks Neil
Food from the menu at Elea golf club – thank goodness a meal where we didn’t get over-faced, yeah right – portion control isn’t on their menu!

Final day of golf – at the lovely Aphrodite Hills, and a lie in too as it was where we stayed for the duration of the trip.  Rolling out of bed onto the course – when I say rolling, I’m not joking after the food we’d consumed between the 12 of us it must have been enough to feed at least three herds of elephants!

Playing with Phil – him being the designated driver of the golf buggy we trotted around the course enjoying each others company and the golf course.  The legendary 7th hole with it Stelvio path look-alike approach to satisfy even the most modest of racing drivers in a golf buggy, a par three which offers a challenge to us mere handicapped golfers – one must play from the back tees to take on the might of the valley – so I did ………………..and failed.  Wondering how many golf balls were in the ravine below and if anyone would be daft enough to retrieve their golf balls? My ball quickly followed into the abyss below in good company with other golf balls I’m sure.  I’ll do it next time. but I’ll take a bigger bat than my 20 degree rescue – clearly not as good as I thought!
Winning on the 17th meant Phil could enjoy the 18th par 5 knowing I’d stuck my ball in the water-twice! and the win paid for our kitty contribution.  Result.
Then guess what – food, after all we hadn’t eaten for at least 10 mins!
Actually I was treated to lunch in the lovely village of Omodos by Kratinos from Aphrodite Hills.  Great company, great food and wine and a great big diet I’m about to start-next week!
Thanks Kratinos, a lovely gesture, I really enjoyed myself and hope my sense of humour was acceptable?
The boys stayed at the hotel and gave their feedback for their few days in Cyprus playing golf (and eating!)

We were privileged to have Maro from the CTO join us for the final day of golf and dinner – another girl in the mix.
A huge thank you to Kratinos, Andreas, Costas, Maro – to Nikos, Mary and to Neil from the respective golf clubs.  But most of all a huge thank you to the boys who accepted me, looked after me and made sure I was OK throughout the trip and giving me the opportunity to enjoy myself and plan big things for Cyprus as a golf destination.

Barry you missed a great time but I was glad to fill your ‘golf’ shoes.
Just as a footnote – the Pro’s clearly ‘warmed me up for golf’ as I played 9 holes on my return and shot 2 over gross – thanks boys….

Contact me on [email protected] for insight into the plans.