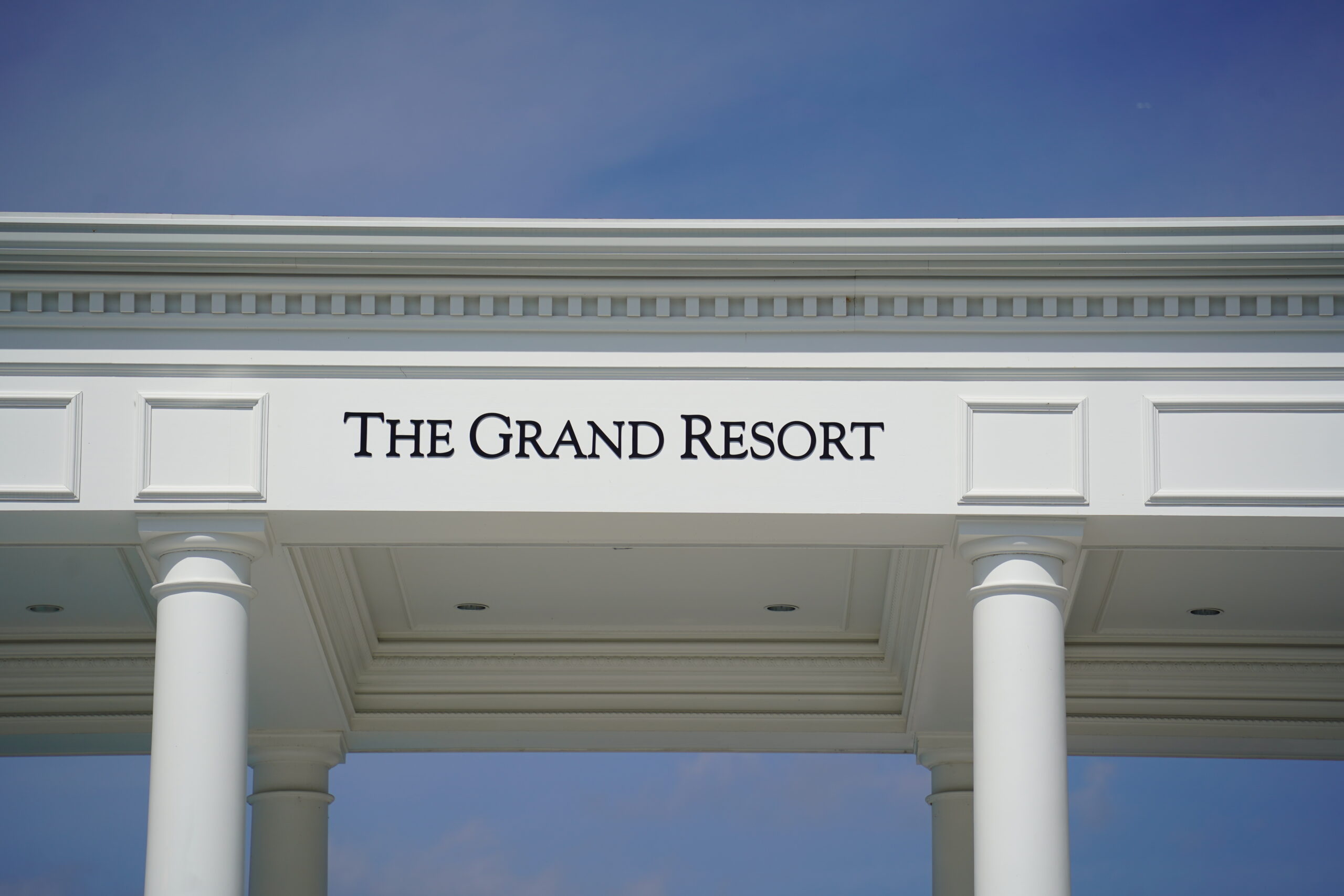 A lovey hotel and two great golf courses – nothing new about that – so bear with me whilst I try to explain why THIS particular golf resort is worth considering?

Playing part of the Penn Ohio Golf Trail, we were given the chance to stay at The Grand Resort in Warren, Ohio – given a rather grand name we are interested to see whether it lived up to its name.

White, sprawling and imposing – yep – Grand by title and Grand in statue.  The opulence continued into the reception area, through the cigar bar and out the back to the pool side restaurant with the golf course beyond, before continuing the circle back through reception with a restaurant off to the left.  A comprehensive wine cellar, tennis and a fitness centre is also available at The Grand.

A clue in its name, Avalon Lakes golf course has, well, lots of water.  But not too much that it became a slog, more an eye-pleasing vista which the water helped shape.  Dating back to 1967, the course was redesigned and renovated by Pete Dye in 2001.  With Dye’s intervention the course changes were drastic, moving 300,000 yards of earth and changing a flat course into one with more interest with gradients and undulations.

The day we played it was wet underfoot, the ball didn’t roll well giving relief or extra yardage off the tee and the atmosphere was damp.  However, wet as it was, the greens held their own.  They were pure with gentle, in places unsubtle sways were there to conquer.  I guess the only niggle for me was the pin positions, with some being on top or part way up rises.  Not at all easy to stop on the top before it came rolling back down the other side, or worse still came rolling back towards you.  The greens were quite large though and getting to them was probably just as problematic that the actual putting.   With the Pete Dye earth movement came mounds. Singularly or sometimes feeding into each other like upturned ice cream domes melting into one.  Some mounds were a barrier for the approach to the green shot.  Clever in its design, the mounds undulations and slight twists all rolled this up into a good thinking course.

Whilst there were many good holes, I would like to highlight a couple.

Hole 8, a par 3 of 129/244 yards SI 2/4, looked so innocuous off the tee.  The green looked like a nice big target, but water left encroached into the fairway for the approach, narrowing its entrance.  Going for the green was the only thing to do – hoping not to pull it left into the water.

I liked hole 11.  A par 5 with its tee positions taking on the stretch of water.  Standing on the tee, hitting it straight over the water along its shortest route is probably the most sensible thing to do, before dotting along the fairway and carefully plopping the ball on the green.  But once crossed over, the strip of water laid along the fairways length on the right, it was just so inviting to try and close that watery angle and land further up the fairway. A good risk and reward shot with so many connotations.

Strong closing holes in 17 in 18. My notes of the par 4 17th; water right to a hidden green below, behind some bumps.  The ball rolls towards the water once on the green too – pretty much sums it up.  I thought this was a great hole, despite being blind for it approach.

On hole 18, a par 4 measuring 295/502 yards, a gutsy tee shot is required through the narrowing of trees on both sides, before the fairway opens up.  The bunkers, water and the ever welcome clubhouse taunting you as crowds descend onto the green watching your near perfect approach shot land a foot from the pin – then you realise its just your golfing buddies watching and waiting to throw friendly banter.  Interestingly, 18 is my first mention of bunkers – and what a hole to mention them on – as they were plentiful along the right hand side. Despite there being a few to navigate or avoid, none of them were that big!

Back to the hotel.  We had a large suite to sprawl out in.  Decorated in punchy browns with a back lit shimmer and accented with white woodwork to add contrast, made for a relaxing space.

Squaw Creek is the second course at The Grand Resort, only second in number though.  We were shuttled the short distance to the course.  With Avalon Lakes having the water, Squaw Creek has – you guessed it – creeks, like veins pulsing through the course.  That said, even creeks end somewhere – and here was no exception as they filter into the odd lake which comes into play on a couple of the holes.  The course opened in 1922 and is the oldest championship calibre course in the Mid West.  Designed by Stanley Thompson, this parkland course is a great compliment to the Grand offerings.

The ground was very wet underfoot and cart path play was in force.   An established true lined course has its disadvantages in the wet though.  With the ground being so soft, it wasn’t unusual to lose a plugged ball in the ground.  Large trees were a dominating feature of Squaw Creek, in fact so much so that on hole 7, a par 4 312/425 yards there was a large tree in the way of the optimum route of play from the forward tee, I noticed this on a couple of holes.

The greens were in great condition and rolled really well with nice subtle breaks.  Again, as per Avalon Lakes, they too were not small.

In my opinion, the opening few holes were some of the best.  Elevated tees, dog legs and creeks dissecting the undulating fairways.   In contrast, whilst memorable, the 18th, a par 3 over water was, outside of the challenge of taking on the water, quite bland in appearance.   The green sloped towards the water, so the skill here was to get over the water but land it short of the pin for an uphill putt.

On any other day, with it being so wet underfoot, I think this course would rank much higher than the day we played.

One thing to note, the green keepers had done a great job in clearly challenging conditions and their attention to detail was noted by their desire to make things look nice as well as play well.  Careful considered planting was in place around the course which gave its overall appearance a softer appeal.