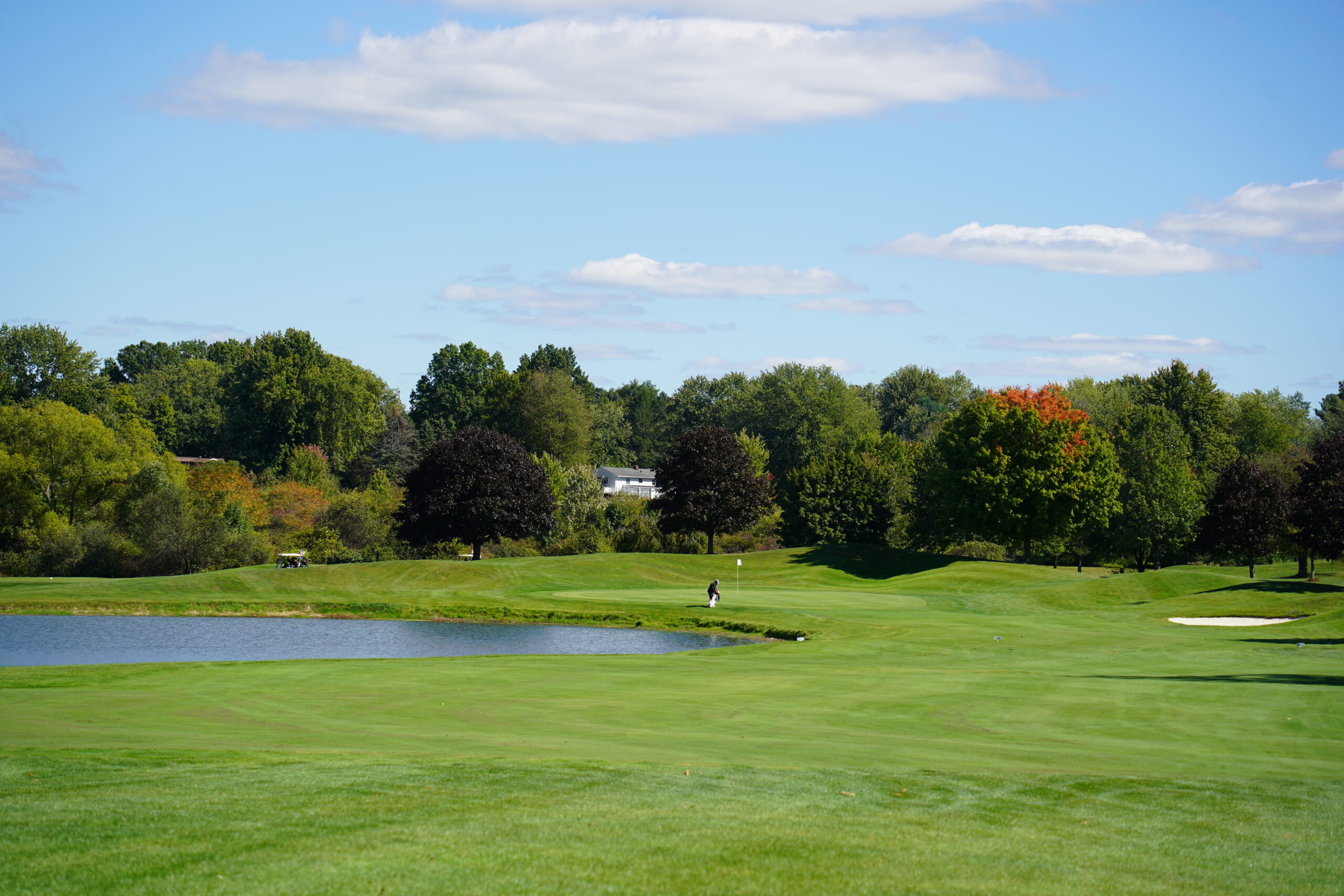 A huge imposing stars and stripes flag was wafting above the tree line, towering over and dominating the car park on arrival.

Guiding us through and into the clubhouse, which it has to be said did resemble a working mans cafe rather than a plush clubhouse, we were ushered into the pro-shop, to we had hoped, meet the manager.  Sadly it seemed the manager didn’t want to come out of her booth and greet us,  Although, through an internal window, she could see us, and we could see her.  She was alerted to our arrival via an internal call to which she responded by giving instructions to her colleague in the pro-shop.  The lady in the pro-shop was so friendly and helpful this bitter rebuff was lessened.

Raintree is a public course and looking at the course with the clubhouse behind us, it looked as good as any others with its clever usage of shade over the tee boxes from the overhanging tall trees, the striking green of the fairways and the complimentary planting.

With no ‘starter’ on the first, we were told to wander down and start playing.  As we were close to our tee-time this suited us anyway, so off we trot.

Once we were away from the clubhouse, the course took on a rather less appealing appearance.  The holes were invariably flat and uninspiring and as we’d caught up with the group in front of us we could see we were in for a long round.  It turned out, three groups in front of us were a four ball – three were walking and one was riding in a buggy – this group became the bane of the day with their extraordinary slow play which certainly lessened the enjoyment of our playing experience without compromising our course review.

Bearing in mind there is a course for everyone and being more tolerant and charitable, it was a Friday afternoon and I’m sure being a public course, did get people finishing work early to go and play golf.  That said a course marshal would have made ours, and the groups around us who were also held up, better about being there.

So whinging done, what was the course really like?

The greens were large and in amazing condition but, it has to be said the front nine didn’t inspire us, the fairways were patchy and seemed like they had seen better days.  Or in contrast, the fairway grass was so long the ball didn’t roll and was thick enough to be problematic too.

Although the sun was shining and it was dry, it was a cooler day.  Maybe the chill was enhanced by the waiting on every shot?  The 5th was the first hole with a little more interest with its sweeping fairway around a small pond to a narrow entrance to the green.  The water was in play for a few of the holes with the 7th again allowing for play over or around the water to a fairly guarded green – with an out of bounds lurking.

Just as we were about to lose the will to live, we turned and took on the back nine, vowing if it was the same, we’d cut our losses and walk in.

Hole 10, a par 4, 250/355 yards was a dog leg left of almost 90 degrees.  I know some don’t like such doglegs as it can spoil the big hitters drives, but it was actually a nice change.  The driving range on the right with little or not protection from any wayward golf balls ended up on the 10th .  This made it quite the lottery to find your ball, if you’d played safe to the outside of the dog leg.

Glad to say things did improve on the back nine, in fact it was as it it was a different course.  But it seems that whilst you’re starting to win in one way, you get knocked down again in another – the highway was really noisy on the 13th – so much so, I had to shout for the microphone – ok I did exaggerate the shouting and caused lots of giggles, but it was a real shame that the constant drone spoilt such a great hole.  This par 4 of 321/461 yards had a ditch guarding its approach to make it a little more challenging.

Certainly the back nine was shaping up to be the stronger nine with the 14th also a nice hole cut in and around the long grass right.  Sadly the heavy rain had made the surface on the left a bit like a watery blister as it rippled underneath your feet.  Some cart drivers not paying attention (or not caring?) had churned it up as they happily sped along, seemingly oblivious the damage they were causing.

On the reverse of the noisy highway and the bubbly fairways we saw deer, red and black squirrel and a chipmunk (we think!) enjoying themselves as they happily shared this green space with the golfers.

The 17th was also a good hole and as the end was in sight, our spirits were lifted knowing this arduous game was coming to an end.  And end on a high it did, with the 18th being probably one of the better holes on the course.

A slight dog leg right off the tee with water at the front and right of the green.  A small stream dissected the fairway along its length, careful navigation to make the green in regulation is needed.  The large shaded green was nestled in a sunken hollow.   Such a nice closing hole.

And what of the club manager when we’d finished our game? – oh well, she had gone home.

Of the ones we’d played, Raintree seemed to be the poor relation of the Penn Ohio Golf Trail, that said, a good selection of golf course is always great to encourage more participation and diversity across the board.

Put these words into video and watch it unfold on https://youtube.com/@travellifestylegolf