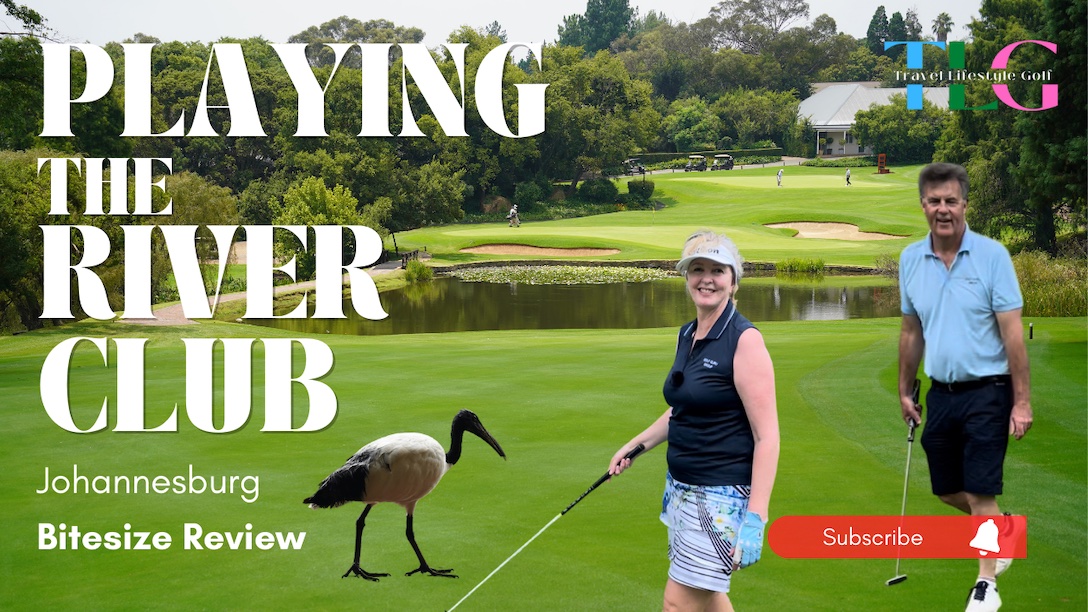 Sometimes, just sometimes, you’re given the opportunity to play a course that sticks in your mind for months afterwards.

The River Club in Johannesburg is one such place.

It is an exclusive golf club that is revered within the local golfing community, so when we were given the opportunity to play it, we jumped at it.

So well hidden is it, that our relatives who have lived in that area for many years, weren’t exactly sure where it’s entrance was.  Driving past one luxury house after another, it was hard to believe that this course could even exist and how it could be as good as they say when in the middle of, to put it bluntly, a housing estate.

Once inside the grounds, a bit like the tardis, the area opened up leaving the houses behind in favour of crisp sways of green thoughtfully edged with striking contrasting planting.

The clubhouse is decorated in neutral and earthy shades which was a great backdrop for the photos, certificates and tasteful artwork on display  The inside sung in harmony within its surroundings as the eye is drawn through the building to the expanse of manicured green beyond.

Harry was our caddy, he was a little quiet to start with but soon cracked a smile at our antics and occasional good golf.  The first hole with its wide fairway and lush green grass – the shade of green a child would have chosen when drawing their perfect house; four windows, a door in the middle and inviting green grass all around.

Getting to test the bunkers on hole one isn’t normal something you’d be happy to share, but as they were fluffed up and the ball was playable in the not too soft sand, it’s one I’m happy to talk about – in fact all the bunkers we visited were the same even good quality.

So why is the River Club still playing on my mind all these months later?  It isn’t an old established course; the type that usually gets me excited.  It was actually established in 1967 by designer Bob Grimsdell – this is not even a course designer I know much about.  Rob O’Friel came in 1998 to do some upgrades, again not a name I know a lot about.  But despite The River Club not rated in the Top 100 (through choice), it is rated as one of the best in South Africa, so why?

To me the main one being, it is playable.  Often courses are designed to be played from the tips, with little regard given to all the tee box positions, I’ve known some clubs simply plonk forward tees somewhere down the middle of the fairway.  The River Club doesn’t do that, it seems to cherish and embrace all golfers of all abilities, giving each tee position a chance at some good golf yet doesn’t punish you if it isn’t quite right on the day.  It has balanced the risk and reward evenly yet is not a walk in the park, although with the green expanses, flowers and local birds, in other ways it did seem like a walk in the park!

Tee boxes were even, I know that sounds silly, but I cannot tell you how many tee boxes I’ve stood on, more often from the forward tees, and they have been like mini mountain ranges as you try to find your footing!

Sure it is in a rich ‘tropical’ setting with the river running alongside some of the holes, but it is also in the middle of Johannesburg, which seems almost a contradiction to the club and course offerings.  That said Johannesburg has changed in the 30 odd years we’ve been visiting.  As with most places, there are taboo areas but these are fewer and further between – they even have an open top bus tour of downtown Jo’burg!

Whilst taking in this super course and enjoying all it could throw at us, with some mixed responses! the half way house came far too quickly.  Although it was on the 12th hole and past half way, it seemed like the blink of the eye and we were sat there enjoying drinks and a snack in the invitingly sculptured shade with windows through the overhanging canopies of the trees to the course.

On hitting onto the fairways, the bounce was fair – it wasn’t so dried up that the ball bounced for miles, exaggerating any wayward shot and punishing you unnecessarily.  On the reverse the fairways didn’t plug either – stopping the ball from any forward roll or gain.

Despite its location, there was barely any road noise, and no houses, that I can remember, overlooking the golf course either – it was as if an invisible barrier had grown around The River Club, a barrier only a select few could penetrate, but once through.…

When the large greens give some bite on the approach shots, then roll perfectly, whilst offering enough break to make you think about it, you know the greenskeepers took pride in their work.

Greenskeepers were plentiful – all diligently working at different tasks from tending the flora on most tee-boxes, to grass cutting, to the caddies making sure the bunkers were returned to the fluffy surfaces once again.

On finishing your round, the 18th green sits just below the clubhouse.  The large terrace of the clubhouse is dotted with tables and chairs and of course spectators for your approach shot on this final hole.

One side of the clubhouse was opened up to give the inside diners uninterrupted views of the course.  A small lake to the right of the  approach on the 18th green meant you could go over the lake, or play safe to the left.

The River Club gives choices.  I’m not talking about the amazing menu choices!  Choices whilst playing your game, choices that can give the rewards yet gently allow you to become too big for your boots.

In all, a class act, and one we’d like to repeat at some time and importantly, definitely one we’d recommend.

You can book your golf round directly through the River Club.

Watch these words unfold on our bitesize video on https://youtube.com/@travellifestylegolf

We are a husband and wife team who not only bring golf to the masses but through words and video we bring it alive for you too.  Enjoy