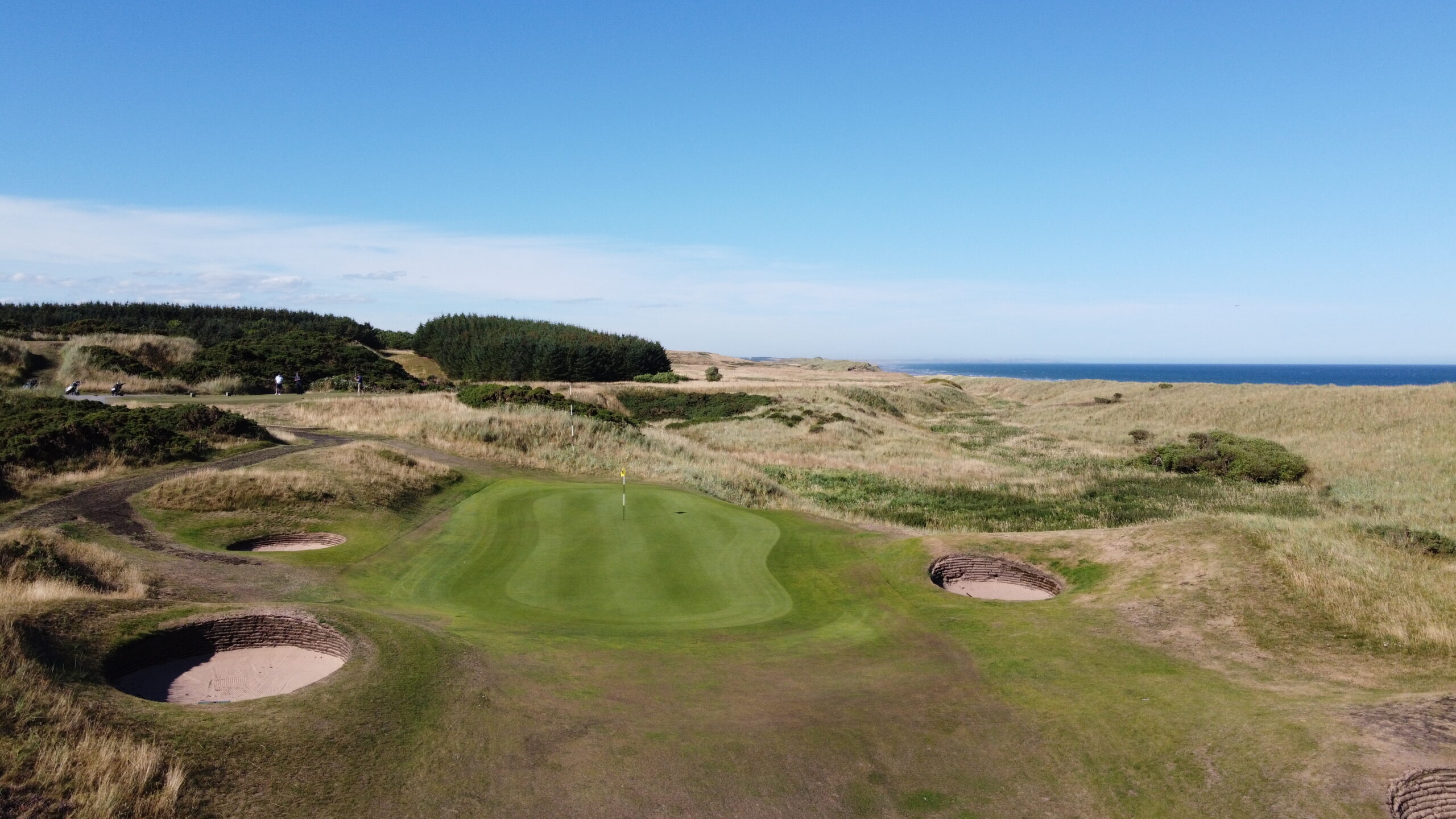 From bubble wrap terrain to ocean side views, Murcar brings the challenge all gofers want and dangles the rewards all golfers need.

Just 10 minutes from Aberdeen, Murcar, originally designed in 1909 by Archie Simpson, Professional and keeper of the greens at neighbouring Royal Aberdeen with James Braid adding his Midas touch in the 1930’s.  A strong combination of clever and thought provoking design for this Championship golf course, where the East Coast of Scotland meets the North Sea.  Testimony to such a strong design is the course has changed little since conception.

However, Murcar started life with some controversy in so far as its name was undecided between Berryhill, Black Dog and Seaton – all names relating to the local area.  With Seaton and Murcar equal in the voting system of 11 each, the chairman was given the casting vote and the rest as they say, is history.  A nod towards these contenders, are in holes 6 and 9 called Seaton and Black Dog respectively.

On a sunny day in August accompanied by a warm breeze to enhance the game, we set off down the first and away from the clubhouse.  The clubhouse remained a beacon, whilst not tall in structure was a good landmark to get your bearings as it appeared on the horizon from time to time.  Two relatively easy starting holes did little to prepare you for the third with its split fairway which dropped down to a second level before taking a subtle turn through the dunes to the bright green ahead.

In the middle of a harsh hot summer and in places colourless fairways, these emerald island greens dotted along the landscape as if a giant was being taunted into playing stepping stones, added a delightful contrast to the course and its layout.  Straighter fairways with the greens at the end resembled an exclamation mark as they drew you in.

Allowing way more than needed for the greens undulations, or lack of! it became apparent that the green keepers had worked hard to maintain not only their pristine condition, but the consistency across all 18 of them.

High sided, banked up bunkers enticed the ball closer rarely giving any relief from errant shots.  It was true the conditions were dry and maybe that didn’t help either!  Perfecting the ‘coming out sideways shot’ one had to be creative.  Even turning the club face around and coming out sideways was something I was prepared to go for as my tee shot landed into the bunker after what can only be described as an ugly tee shot!

Sandy coloured long wispy grass framed the tee boxes and lined the fairways, with patches of heather to add more colour.  Fairways shaped around the natural terrain where keeping the ball in play became more and more apparent.

As you turn you back to the North sea and head inland the ocean views remain present with the wind turbines gently rotating as the wind blows.  Looking small in the distance and turning majestically in the breeze, belittling the huge structures they really are.

Coming into play is the 11th, called Railway which has its own back story.  By private arrangement with the Seaton Brick and Tile Company for a princely fee of 30 pence per week, golfers were transported from nearby Aberdeen, directly through nearby Royal Aberdeen and past the doorstep of Murcar clubhouse where they were dropped off to play and enjoy Murcar.

It was agreed to restore the course back its original design in 2005, omitting the now defunct railway line and coinciding with the refurbishment and reopening of the clubhouse in 2006.

Even as the wind got up towards the middle of the game, the summer warmth held its own as we started and finished in golf shirts.

In all, a perfect day for golf on this beautifully sculptured course