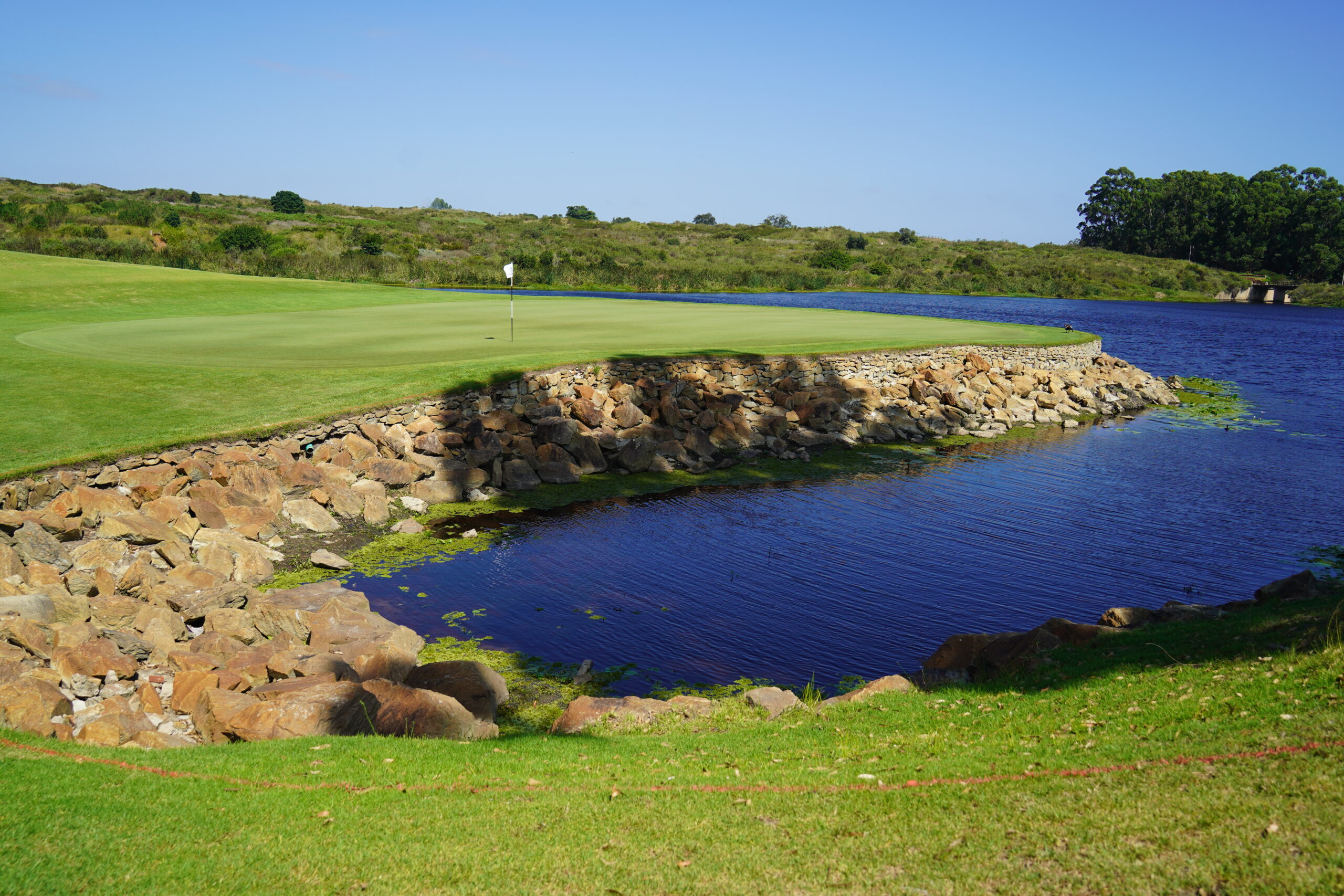 One of three course in the purpose built Fancourt resort near George, South Africa.

Our first time to Fancourt, and we were excited to be there after about a five and half hour drive from Cape Town.  Having an afternoon tee time allowed us a leisurely drive and time to check in before the golf.

We were met with the friendliest starter, Akhile, and then we were off playing the 5th best course in South Africa.   It didn’t take us long to settle down on the beautiful Montague course.  The tee boxes struck me first as in great condition, flat and wide enough for even my height! Most noticeable was the tee markers themselves showcasing the King Protea (National flower) from the back tees through Springbok, Galjoen, Yellowwood to the forward tees being the Blue Crane (National bird).  It later came to light how much flora and fauna there was being nurtured on the Montague and the other courses across the Fancourt offerings.  Noticing the tree mulch of almond husks to help retain moisture at the base of the trees gave a lovely contrast in colour to the freshest of greens on the fairways and the cleanest white sand as well as being a great bi-product for recycling.

In the recent Dimension Data, part of the Sunshine Tour event, which finished the day before we arrived, German golfer, Alexander Knappe won with a whopping 23 under.  The stats showed that the Montague played the hardest during the tournament.  And here we were tackling it after a 5.5 hour drive and totally oblivious as to its mind blowing stats.

Hole 4 was a par 5, (398 meters/435 yards up to 527 meters/576 yards) SI 17 off all tees made for an interesting hole in so far as a big expanse of water popped up around the back of the green.  Thats after a sweeping fairway gradually guiding you to target and a slight narrowing onto the almost island green, made it a great challenge.  But the blue water was so dark, it was almost inviting – I say almost!

There was freshness in the air playing that late summer afternoon, a welcome breeze and an overriding excitement for actually being at Fancourt that only those who have visited will understand.

Sweeping fairways, undulating greens and large shapely bunkers softened and gave the easy on the eye appeal.  Bunkers were easy to play from, although they did have a few stones in them.

There was a good quality half way house to take stock, erase your partners good score, work on your mind game and generally be a menace whilst preparing for the back nine, which didn’t disappoint.

The 17th, a par 3 over water, measuring 116 meters/126 yards up to 190 meters/207 yards, SI8 from all tees is a nice looking hole, well so long as you’re not scared of water!  With very little bail out the menacing water was one thing, but the strategically placed bunker after the water but before the green was not much of a welcome either..

As the days progressed the slick greens became a bit of a joke, as you will see on the  www.youtube.com/c/travellingladygolfer “Fan of Fancourt” video

Montague might not have been the easiest course, but it played brilliantly- the course that is, not us!!