For golf, southern hospitality, good food, the climate and a whole lot more….
This is my story June 2014
Myrtle Beach, Hilton Head and Charleston all spring to mind when thinking about South Carolina, and so they should and visit you should, but the State of South Carolina can offer so much more too..
With almost 100 golf courses in the Myrtle Beach area, playing but 2 and half rounds of golf barely makes a dent in what’s available. Before I wander my mind to the lovely Myrtle Beach area, I’ve got to mention up-state South Carolina – almost a contradiction in grammar, I flew into Greenville via Atlanta where I bumped into my Colombian buddy Fernando – so I knew we were in for a good trip!
A lovely group of people met us from all over the globe – all golf tour operators, all fun people ready to tackle the golf and what up-state had to offer.
As with most of these trips there is so much to see we often run out of time, so day one was meant to be 36 holes – we managed 27; 18 on River Falls and 9 on Cherokee Valley.  Playing with Ricky from South Carolina, Ronnie from Sweden and the infamous Fernando from Colombia at River Falls, we negotiated the undulations, valleys and managed a win on the final putt! after 18 holes – not a bad result as team Colombiweed (Colombia and Sweden) had 2 shots more than the dream team of red white and blue (UK and USA).  As River Falls was quite a short course for ladies, Ronnie decided that if Ricky and I were winning, I had to play off the tees one back from the reds (belle), I played a lot of holes from the Golds (Womens plantation), until team Colombiweed dug their heels in and I got to play from the very short Belle tees. Fair compromise – and I got to see two sets of tees! Belle tees measure 4775 yards, women’s plantation tees measured 5634.  A lovely Gary Player signature course.
Playing with Ricky and Fernando again in the afternoon at Cherokee Valley, we swapped out Ronnie for Horst from Germany.  Horst has a very dry sense of humour, so it didn’t take long to relax with Horst, and we enjoyed another, albeit shorter game of golf on a  really nice parkland course in fact a challenging golf course with undulations Dolly Parton would be proud of with amazing panoramic views towards the Blue Ridge Mountains.  Feeling a little jaded having arrived on a transatlantic flight the previous evening, still on UK time and played 18 holes already – I think I could be forgiven if I played off the Reds which measured 4308 yards – but I didn’t even play from the silver tees measuring 4771 yards, I played from the white tees which measured 5469 yards – and played like a total spanner! Serves me right for thinking I’m better (fitter) than I am!
That night at the bar (essential fact finding research) I nearly fell asleep except I was presented with a lurid blue drink that was a throw back from a nuclear disaster – which tasted almost as bad as it looked, I must have glowed as I walked back to the hotel barely putting one foot in front of the other!
Totally refreshed the next day after packing up the bags – I did this quite a lot over the next couple of weeks, so much so I didn’t bother unpacking sometimes and found clean clothes at the bottom of my bag when I got home – whoops! and apologies to the people of South Carolina. 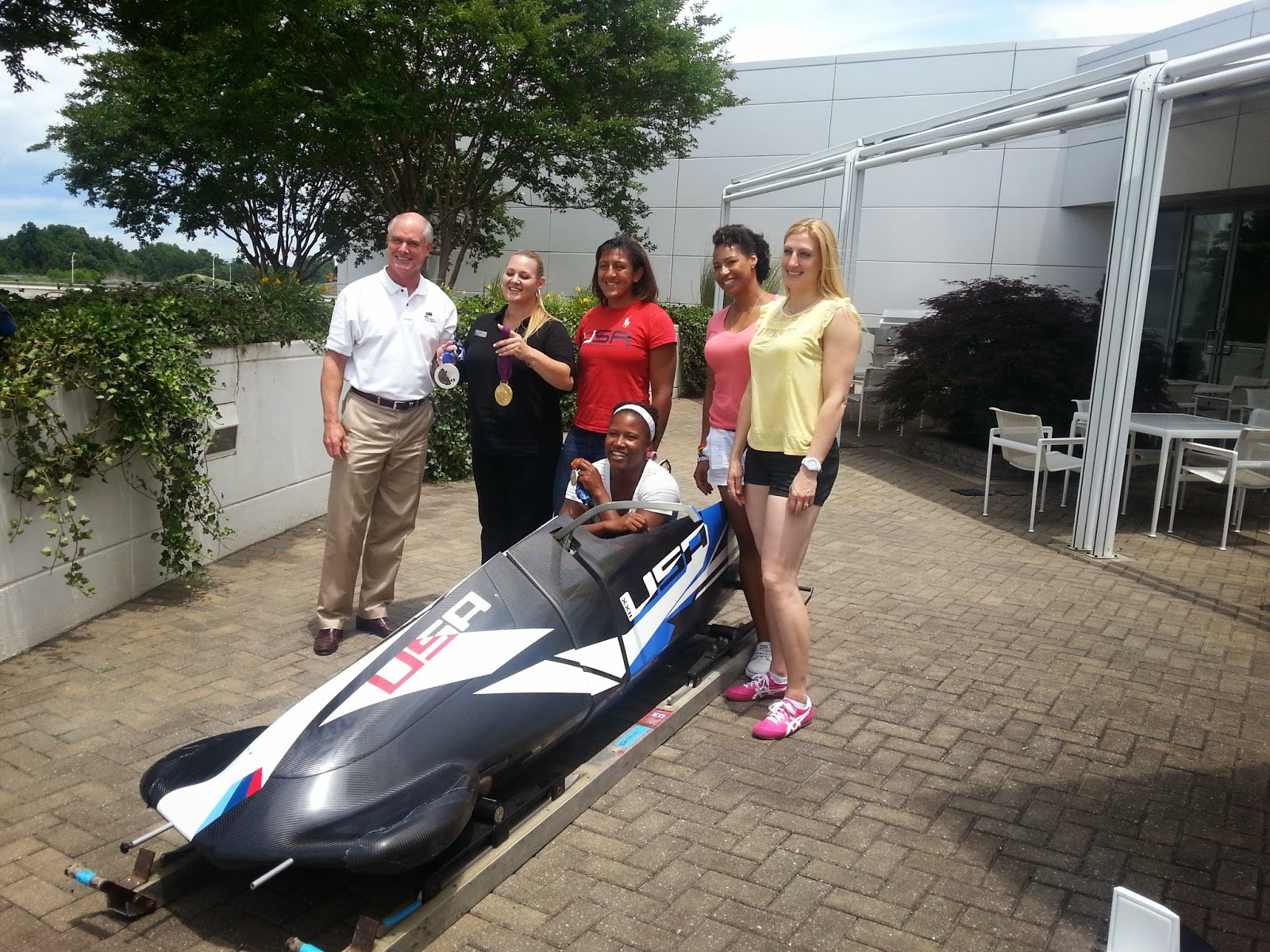 BMW day – A German car made in South Carolina, with enormous success by all accounts.  Off-roading with a Colombian is going to test my hairdressers ability to hide grey hairs in the future – he was (is) mad, it was great, I got my own back when I took to the wheel though.  Speed trials came next and no-one remembers 4th place, but that’s where I sat after a few goes at trying to beat the winners – but failing miserably.  Personally I blame the car-as all not-so-good racing car drivers do! what an amazing experience though.  Skid pan next and to my disappointment we were just the passengers.  I went last in the group.  After a bit of goading about pussy-footing around with the previous groups, the much-better-than-I qualified driver flipped the car backwards and proceeded to tack on the oil.  James Bonds Martini -shaken not stirred springs to mind. Brilliant. Oh and who else was there, clearly practising their driving?  Why the American Bob-sleigh team, that’s all!

The group split, some went to Myrtle Beach (me included) others to Hilton Head – farewell my Colombian buddy, “we’ll meet again” playing in the background.  Thanks Kristin, Ricky and Tim for a great up-state experience.

Myrtle Beach – we met with the rest of the Myrtle Beach party who arrived that night – ha, I was OK by now, securely on US time but had lots of sympathy (not) for their jet-lag!
Another action packed program ensued, starting with golf at True Blue, I think the Brits bought the rain as we were rained off after 9 holes – shame, as I thought the course was lovely and wanted to play the whole course – but not in those storms!  Never mind it meant we had loads of time to see a variety of accommodation options….and golf courses as they whizzed past…..blurring into one…

Shopping addiction satisfied at the PGA superstore – not my addiction I hasten to add! Men! we set off for Prestwick Golf course, a PB Dye golf course.  It was difficult to draw similarities to the Scottish Prestwick GC – as it was so hot at this one!  Michal my new golfing partner from the Czech republic and I halved our match after being up on the front 9 and falling back on the back nine – a half is good enough.  Really nice course though.  And I was wearing my new summer weight golf shoes (which of course I’d had for ages according to customs back in the UK!) 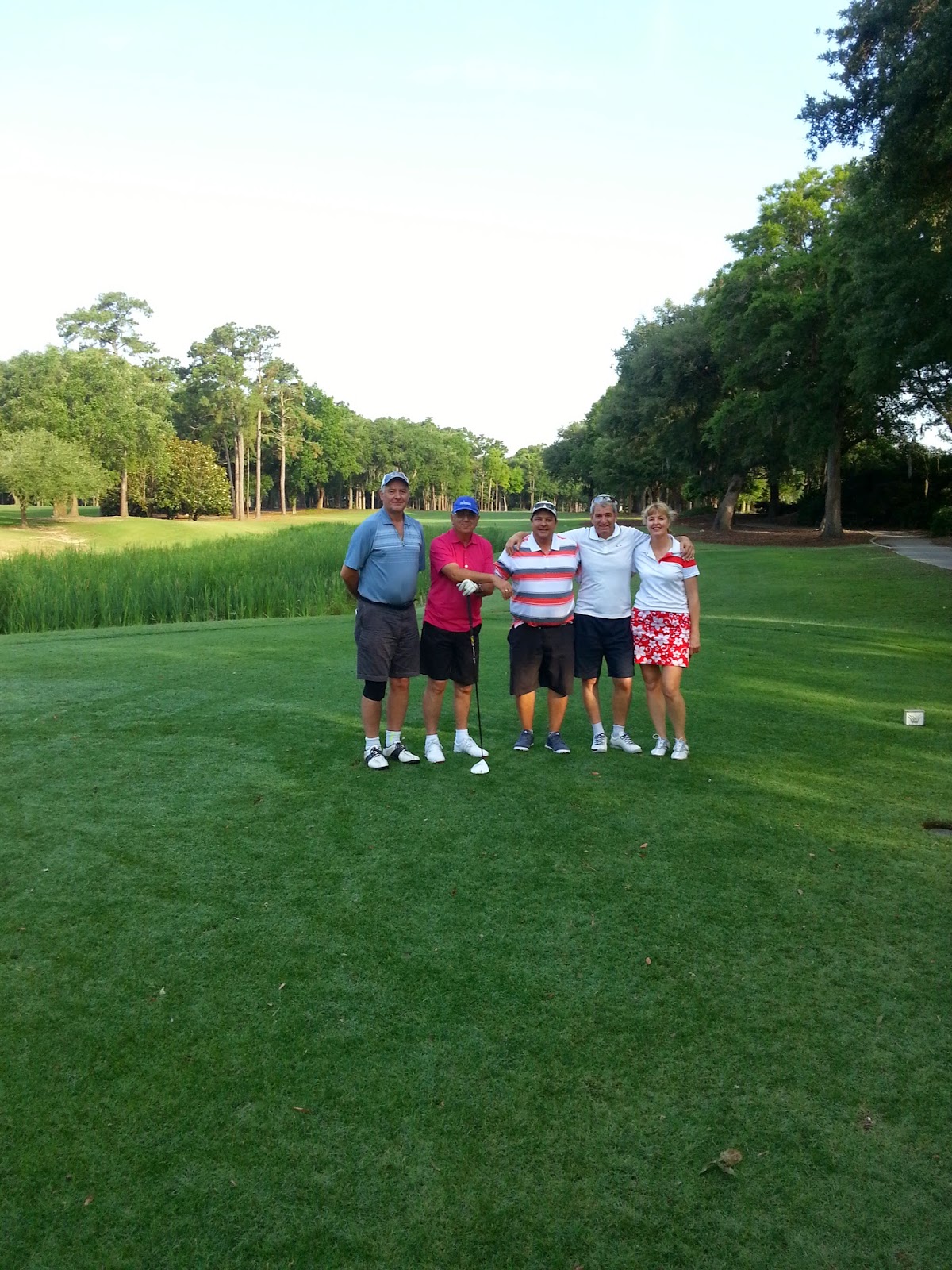 No Chernobyl style drinks but a beer was welcome after playing in that heat – loved it – the sun and the beer!
Golf at Pawleys Plantation was our final game in Myrtle Beach – great golf course but the team were mis-matched and we lost badly.  Lennart my new best mate from Norway and I lost to a fellow Brit, Paul, and Hugo the man from Paraguay – and did Paul let us know. I can still hear his voice ringing in my ears – I haven’t lost a match yet…..rah rah

Transfer to Charleston for the convention – and some rest – yeah right, no rest but no golf either just full on days and nights in meetings and dining. 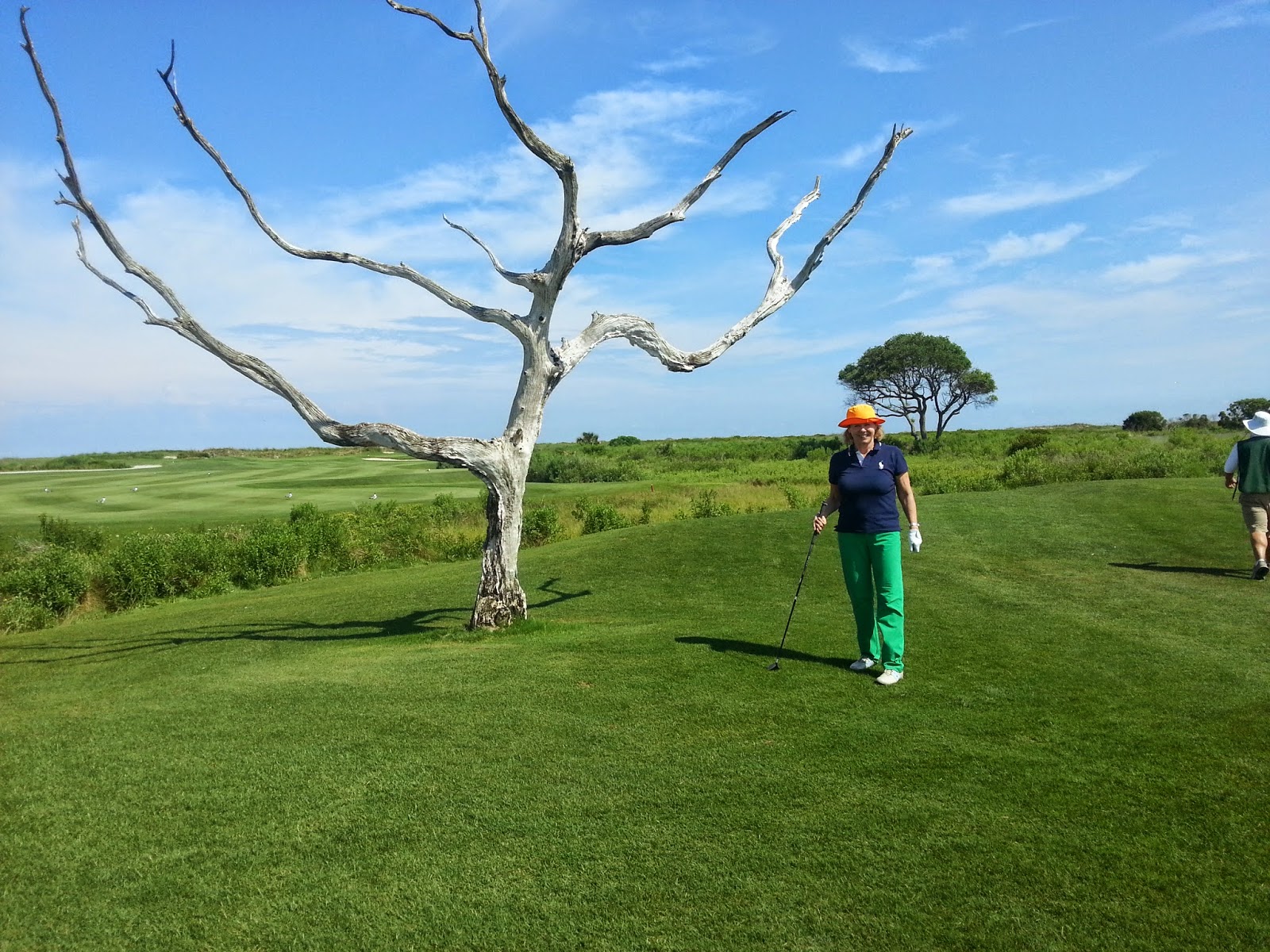 8 pound heavier (!) the final convention day was a cleverly organised round of golf on the Ocean Course, Kiawah Island.  The North Americans (USA and Canada) took on ROW (rest of world) in a Ryder Cup style competition.  In a four ball with a lovely German lady, Rosie we pitched ourselves against the lovely Barbara and Janet from the US.  A shot gun start with two teams on each tee meant a slow round and lots of gator aid being drunk -surely they cant be good for you in those bright colours?, but they 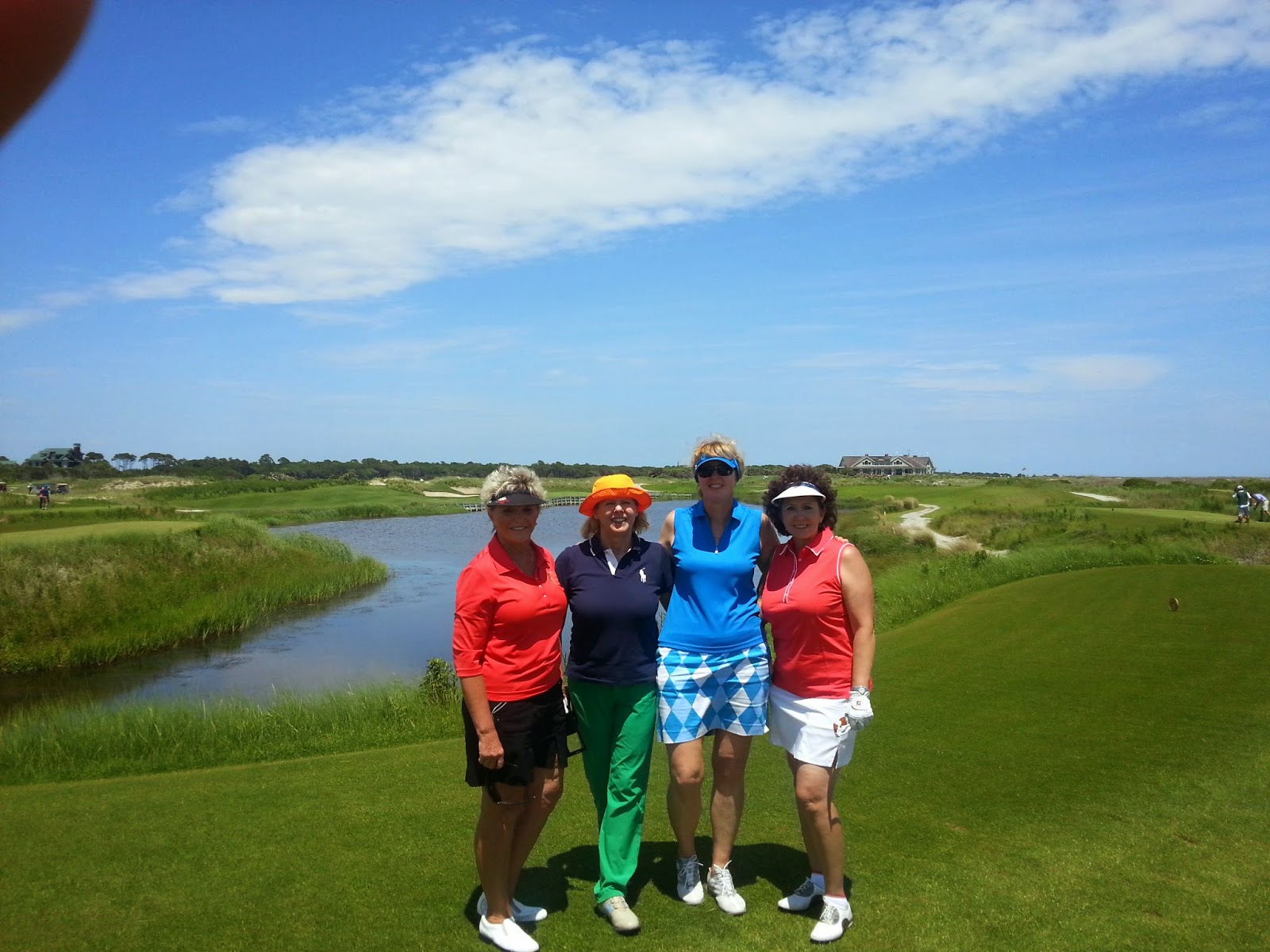 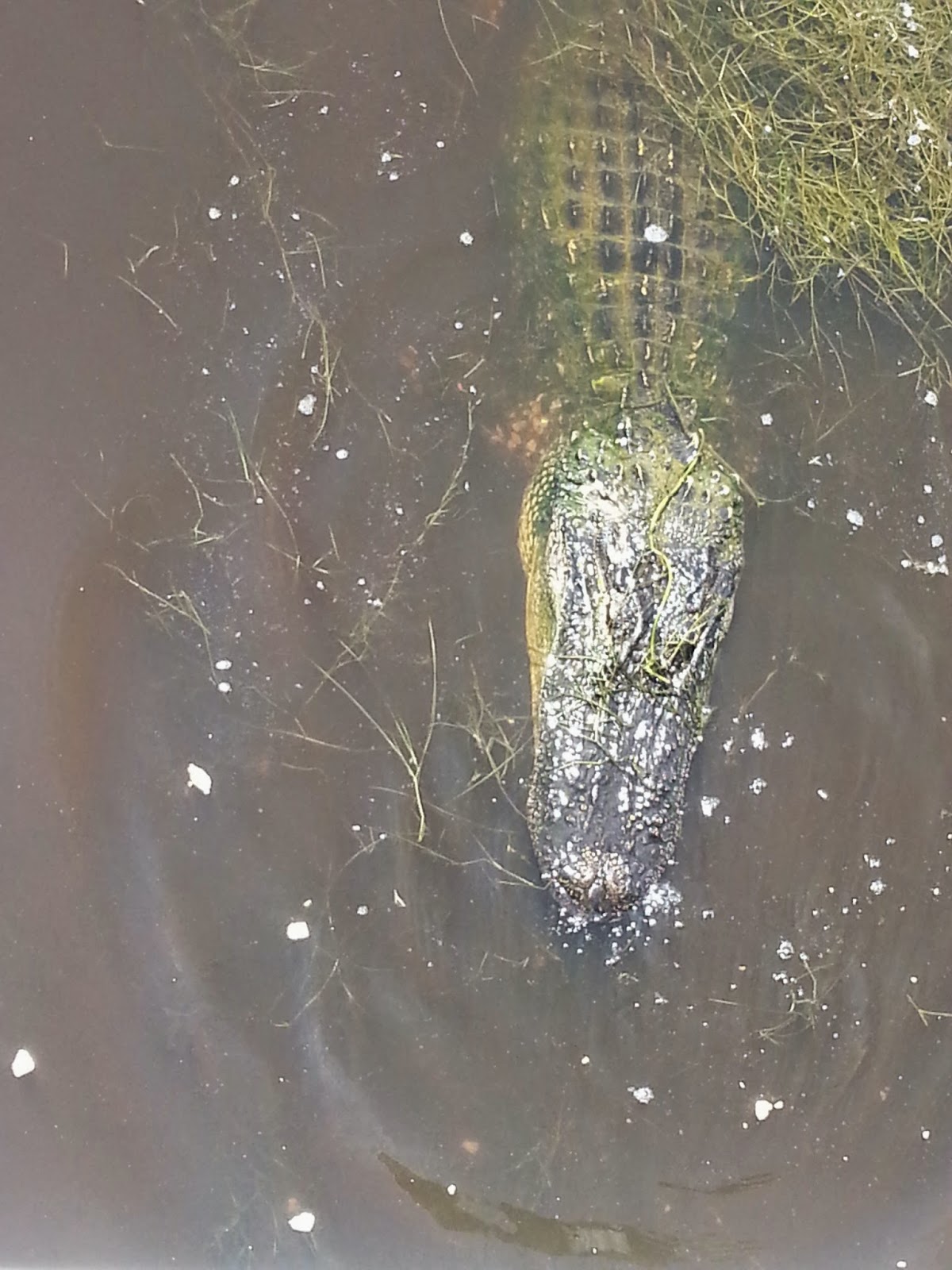 were good, and much needed after a 6 hour round of golf.  ROW lost 17.5 plays 18.5 – never mind Rosie, we held up our end of the bargain.
BTW I think Paul lost his match…but he did see the biggest alligator on the course – fisherman stories are clearly international.
Final dinner – a relaxed affair with lots of drinks and food – it is America after all.
Great evening with an absolutely amazing band playing live – biggest draw back to the evening – the band finished way too early and as usual, just as everyone had warmed up.
Staying in Charleston after the convention, we said good bye to old and new friends and set about settling into another hotel.

A reasonably relaxed post-convention trip was planned with the first course to be played; Stono Ferry Links, just a stones throw from Charleston was our first game back to golf after the convention- a nice gentle easing back into the game.  This time I made sure Paul and I played together (!) shrewd move on my part I think.  Stono Ferry with its guns on the course to keep the Brits out (I think they only mean Paul!), was a very playable golf course – and no I wasn’t allowed to play off the forward tees – heaven forbid!
With sadness I left the happy golfers having been given an opportunity to go to Pinehurst and watch the US Open on Friday 13th June. WOW – if you’ve never been to  a big PGA event – put it on your list of things to do – an fantastic way to end a fantastic trip – thank you Gary, Ike, Shannon, Susan, Mark and the whole team for your time, effort and devotion to making golfers feel welcome.
Great trip – great golfing and fun destination
Do you want to visit South Carolina? see www.redteebreaks.com or email [email protected] for your golf package of a lifetime.