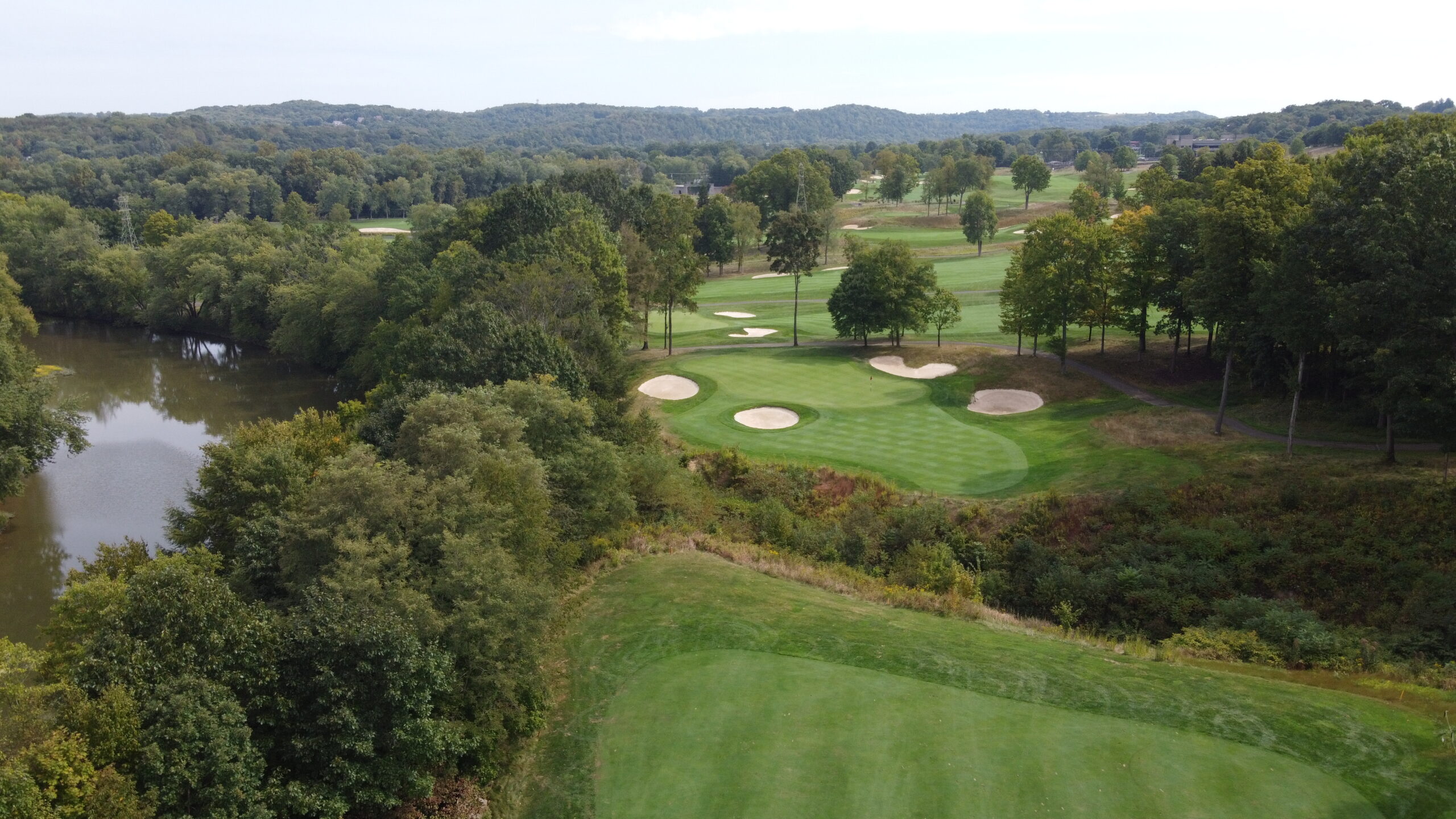 Skipping over to the Ohio border into Pennsylvania to play Olde Stonewall, second in our Penn Ohio series and part of the Penn Ohio Golf Trail.

Met with an imposing castle like structure, stone built and very much in your face in a Disney esque way.  If you can divert your eyes away and towards the golf course, you’ll be immediately struck by the Clarice Cliff style hillocks as they duck and dive sweeping into each other into infinity.  With the odd golf flag showing its head flapping bravely in the wind commanding attention as if drowning in a sea of green, to be lost as the wind drops.

Dots of trees cling to the edge of the fairways, just starting to show the true colour of autumn.

The magical mystery tour of Olde Stonewall golf doesn’t stop there – the water comes into play from hole four – a shortish par 4 299/434 yards, SI (handicap) 4.  It’s dark reflective water mirroring the early autumnal scene.  The hole plays alongside the water on the right, then the green takes a little turn into the middle of the water forcing you to re-think your approach.  A green, albeit large, with water on three sides takes some nerve.

By the eighth hole the sun came out, underfoot started to dry out and the layers started to be peeled off.  The course took on a whole new look as the back nine beckoned.

First thing I noticed about the back nine – there were no par 5’s, doesn’t lead you into thinking about the course as having much imagination or options.  But you’d be wrong, in fact the back nine was more spectacular than the front, with its elevation changes, shots through trees and overall appearance of ‘come and get me’ holes.

Long grass, akin to a links style framed the tee box of the ninth and by the eleventh, an elevated tee gently entices you to shoot for the perfect diamond cut fairways then taunting you as the ball rolled sharply left to right on the slope.  The green itself was large, as others had been, this one also had subtle breaks as it sloped back to front.

Then you climb higher up to the twelfth to a plateau shooting towards large green spaces of fairway interspersed with longer grass towards another large green.  On reaching thirteen, you’re taken in, Olde Stonewall has cast its magic spell with this elevated par 4, followed quickly in succession with the par 3 fourteenth.  Even from the elevated tee the green looks huge.  Back to back par 3’s the 15th is such a pretty golf hole – again that elevation, and again the feeling I can do this as I took my shot which bounced off the left edge of the green and into a deep bunker.  I played the middle position tees on this hole as they were just more interesting and challenging at 164 yards.  Not really appreciating how low this bunker was, my mind was focussed on getting on with it but I was stopped in my tracks as I approached the bunker as I saw a large rodent type animal.  This turned out to be a ground hog who proceeded to saunter out of the bunker at leisure and squat on my golf ball on route!  Not sure if it was trying to hatch it or mark it, but left me in fits of giggles as I got the ball out to a few feet of the pin for an easy par.

The sixteenth also bought pleasures of its own.  The  elevated tee not only gave you that sense of whack-ability but nudged you into taking stock and appreciating how pretty Pennsylvania is with this tee shot being through a gap in the canopy of the trees to a large sweeping fairway below.

As you descend down towards the closing holes, it was good to look back and wonder what on earth happened up there as you marvel at the trees hugging the hillsides and the golf course plotting itself around them.

The only downside to Olde Stonewall was the lack of care and attention – the greenskeepers were plentiful, all were cutting the grass, but sadly the bunkers were left un-raked and the greens were rarely repaired.  Such a shame for such a great course, that said, we’d definitely go back – not least because Steve won and now took the lead following our first game half at Pine Lakes!  It’s still all to play for – I kept reminding myself with six more courses to play!

Put these words into video and watch it unfold