Please don’t just look at me and make assumptions? Golf club fitting; then and now

Golf Guru Group1st May 20190 commentsUncategorized
A free 7 iron and a selection of hand me down clubs from neighbours and friends got me out playing the game of golf many moons ago.  They were perfect, they were mine and they got me going in the sport I still love to play today. In those days my handicap was dropping at a considerable rate so progression from this eclectic mix of golf clubs was rapid.
I didn’t really know where to start to get new clubs, someone suggested American Golf, so off I toddle, credit card in hand.  The bonus was the Callaway rep was there, Callaway were one of the brands I was told were good, so I was delighted to see him there.  One look up and down and he handed me a ladies 7 iron.  I walked out.
Whilst I had only been playing a relatively short time, I knew that being quite tall for a lady, the one’s I felt most comfortable with were mens golf clubs.  The rep didn’t ask me which clubs I used, brand, type or anything about how I hit the ball, he didn’t put me in the net with my existing clubs, he just assumed that as a women I used the same generic set as other women.  A lost sale for American Golf and for Callaway and worse still, no new clubs for me!
Some  time later, I plucked up courage and went back into American Golf and bought a second hand set of mens senior Cobra irons, they felt great and remained perfect for a long time.  As my game peaked and trough some years later I was offered a fitting from Nike who were looking to work with forward thinking woman golfers in the industry, it was such an amazing experience and I learnt so much during the fitting process; about myself, my expectations, my golf and of course the clubs themselves.
With excitement, I picked up my new clubs as I boarded a plane to Columbia the next day.  Arriving in Columbia, jet lagged and in need of some non-aeroplane food and good body stretch, I went to the driving range – what a disaster, I couldn’t hit a barn door – it was embarrassingly awful – but I was tired and jet lagged.

Playing the stunning Ritouque course in Bucaramanga the next day, I set off in the blazing sunshine. The golf was shocking, I topped or missed pretty much everything – the only iron that was working for me was the 5 iron, the rest I missed, literally missed the ball.  Despite the great experience of the club fitting, the analysis and time taken to ascertain the best ones for me, they simply didn’t work.  The front nine of that course was a shocker, but the back nine, I came in one over gross, on the 10th I got a bogey, with the remaining 8 holes of the game shooting level par.   Yay fixed!

Or so I thought.  The topping and missing continued for a few more rounds, back in the UK and pretty much every course I played over the following couple of months, with no repeat performance of the great golf at Ritouque. 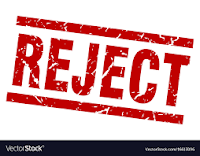 In desperation I mentioned this to my golf club pro, he was baffled exclaiming that he fitted them for me. A short while later they were returned to my pro-shop with a ‘reject’ sticker squarely upon them.  He took one look and admitted that one of his staff had given me the wrong set of clubs – I had been given a ladies set of the same clubs, they were about 2cm shorter, and it dawned on me why I had only been able to play the 5 iron!  The pro in the shop had again taken one look at me and given me the ladies set, ordered at the same time as mine, without really thinking about the clubs that had been fitted to me. Reassuringly I knew they didn’t work so I was proud of myself for not over egging the reality of my game, the good and the bad!
Fast forward to a couple of months ago, in conversation with Cobra, it seems that I’m now ready for another chapter in my golf club life.  Anyone looking for golf clubs appreciated the myriad of choices, not just brands but flexes, weights, club heads; oh my where to start!
Many people buy golf clubs off the shelf, as you’ve read I’ve also done this, but you can’t beat a good set which has been fitted to you, for you or the experience you gain during the process. 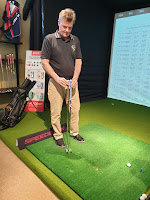 I’m not a brand snob and I have an open mind to most golf equipment but my curiosity was pricked by the Cobra F9 One length irons, not typically marketed for women, but I use mens clubs, so why not try these little beauties. Two historical broken wrists, I was after clubs which didn’t argue with me, ones that simulated that hot knife though butter moment, ones that felt right for me and my over swing.  A set that would be as fluid as my swing and give the results I’m after, and of course with little or no effort.  Big ask, maybe? 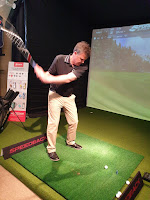 As the one-lengths aren’t really marketed to lady golfers, I wanted to give them a true 360 male/female without bias review and took Steve from the office along for a fitting too.
Steve, a 10 handicapper who cracks it a country mile was fitted, half an inch longer than standard length using the KBS Tour 80, 90 and wedge shafts with a 2 degree loft difference seemed pretty perfect for him.  But importantly, he loved them all, he understood the technology behind the club and was hitting them like a dream.  His game and swing are consistent, they worked for him. Easy. 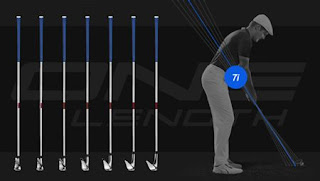 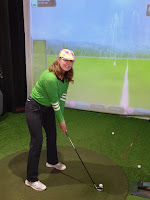 My club fitting was a couple of weeks later.  I met with the same guys from Cobra and went about having my personal fitting.  The Cobra F9 7 iron was my anchor iron, the one iron all others are based upon with regards to length, in essence the one lengths are engineered using matching 7-iron length and swing weight specifications, with the ethos being the one length configuration is designed to simplify your game by reducing the variability in your swing and therefore increase your confidence and consistency. I loved that 7 iron, it was a dream – next! 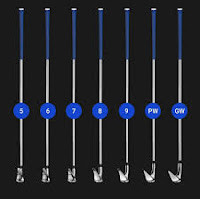 The 9 iron was equally as comfortable, this surprised me with its longer length shaft not really hindering the swing plane, it just felt so good, comfortable and easy.
I really liked these two clubs although in fairness they were achieving about the same results as my existing clubs.   Stats are great, so long as they are read correctly and allowance made for the situation; a bit like going to the doctors for blood pressure, waiting way past your appointment time and having an unusually high blood pressure as a result, great but take a broader view or with a pinch of salt, or maybe not in this example!!   The Cobra guys had this covered for me, they took into account the simulated conditions and gave stats accordingly focussing on the fly length rather than where it ended up following the roll. 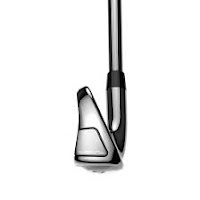 Wider soles in the 4-6 irons lower the club’s centre of gravity and add bounce, making it easier to get the ball airborne out of any lie, so I was looking forward to trying these.  Sadly picking up the 5 iron one length it started to go horribly wrong for me, it just didn’t feel comfortable, it simply felt too short so maybe I am so ingrained into playing a longer 5 iron, maybe it is a habit I just can’t change?  This made me keen to try the next one along the line – the one length F9 5 hybrid, a hybrid is a neat little club, I love to use mine, so was really quite excited to see if this also worked for me – it didn’t – I was gutted.  My 5 iron and 5 hybrid simply didn’t make enough difference to my distance stats, the margin of difference so low compared to my anchor 7 iron.

The weight of the shaft didn’t change throughout the process, although 3 different KBS shaft weights (KBS Tour 80, 90 and Wedge) are available in the set to promote the desired launch, feel and trajectory for the long irons, mid irons and wedges.  With their co-moulded medallion, a 3-piece multi-material medallion design featuring aluminium, TPU and acrylic foam damps vibrations to promote a softer, more responsive feel, in my case this didn’t seem to have the desired effect, but worked perfectly for Steve, who’s stats gave a progressive increase in distance and height for each club working their way through the set.

Not to be deterred, and with excellent knowledge from Joe and Jack of Cobra and determination on my part I was given a 5 hybrid in regular length – and it was lovely.  In summary, whilst the Cobra F9 one lengths aren’t for me they were spot on for Steve.
This isn’t a gender thing, it is literally the distance being obtained from one club to the next, which in my case was very little. 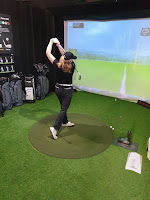 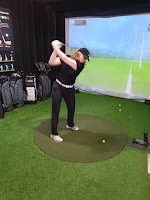 What have I learned from this experience?
Cobra work with you, they change club heads they change shafts and will try and make the clubs work for you based on your specific stats maximising their vast knowledge and experience gained from doing this job day in day out.  The guys I met were fantastic, they had a sense of humour, weren’t pushy at all, their honesty and integrity about mine and Steve’s club fitting was refreshing, in essence, if the F9 one lengths weren’t for you, they said so. A sale is a sale for sure, but their reputation as club fitters and finding the right mix of clubs for you as an individual golfer made the process relaxing and easy to understand without a pressurised sales pitch. 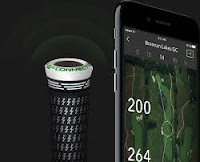 What was quite neat though, the COBRA CONNECTTM features electronically enabled grips in the entire 2019 KING® family of golf clubs.  This means you can track your improvements with every club in the bag. Powered by Arccos, the COBRA CONNECTTM, provides detailed stats and analysis of your clubs’ distance and accuracy while offering access to an advanced GPS system for more than 40,000 courses! How cool is that!
Apparently, players using the Arccos Caddie shot tracking system for at least 15 rounds have seen an average improvement of almost 3 strokes over the course of one year.  Now this is something I do need!
Everyone should have a club fitting, don’t be deterred by the variety of club manufacturers, don’t be worried if you mix and match, just the knowledge of the experts, whether this is your golf club pro, or specialists for specific manufacturers, just find the clubs that work for you, try different ones to find the right ones for you.  I assure you that things have changed considerably since my first experience with Callaway, club fitters are experts who simply want to see you play the best you can with the equipment they provide.  Sadly Cobra F9 one length irons weren’t for me, but Steve found them amazing, the order is placed and I’m still looking!
Anyone out there looking for a female mid range golfer, who uses mens clubs, two broken wrists and a massive over swing, oh and ones that put the ball in the hole for me – just let me know, maybe I can find my perfect set one day, as Steve has done with The Cobra F9 one length irons.
Fingers crossed.
sarah@golfgurugroup.com